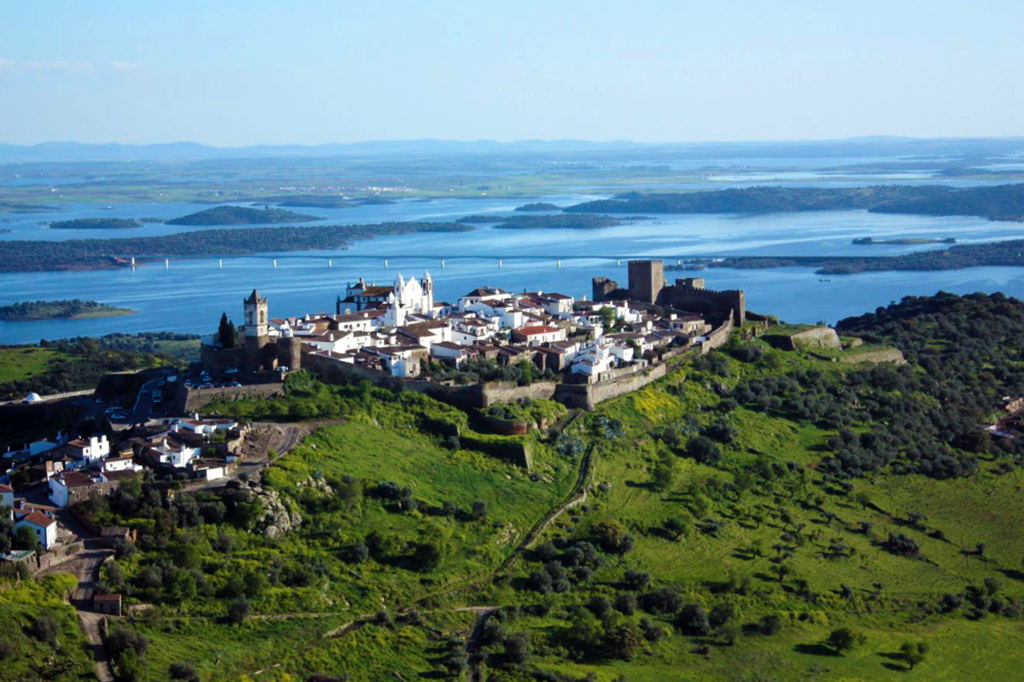 The airy medieval village of Monsaraz, maintain their magic of yesteryear as few places in the world. Made of lime and shale, this place whispers to us through the echo of our footsteps in its streets, magnificent stories of bold kings, Knights Templar, brave people and ladies of simple beauty. Suspended in time, the historic Alentejo village, one of the oldest in Portugal, is a must-see destination on its list of places to visit in the Alentejo. Especially after, in 2017, to have won in the category “Aldeias Monumento” of the contest 7 Wonders of Portugal – Villages.

What to see in Monsaraz

The walls that surround the village guard a welcoming village, where light caresses the picturesque and traditional homes of the hospitable people of this land. To discover Monsaraz is to travel in time and enjoy history in the present. And there is so much to see and feel in this charming time machine, right in the heart of the Alentejo!

As its streets are ancestors, Monsaraz offers a spacious car park near the walls, so that its visitors can visit it as it should be: on foot and without care.

Enjoy the imposing and peculiar enclosed wall that embraces this village-museum of the Alentejo, erected during the Restoration Wars. In its plan, this wall foresaw the construction of the Fort of St. Benedict, originally in star shape, the Baluartes of St. John and the Castle and the Hermitage of St. Benedict. The construction of three towers was also planned in Monsaraz: the first, in the marvel of São Gens; the second, in the Estate of Pipes; the last, in the estate of Ceuta.

The walled fence of Monsaraz has four large doors through which you can enter the village. The main one, the Porta da Vila, is protected by two semi-cylindrical turrets and has, in addition to its Gothic arch, a tombstone consecrated to the Immaculate Conception in 1646 by King D. João IV. The Porta d’Évora, on the north side of the wall and also of Gothic arch, is protected by a cover. The rest, d’Alcoba and the Hole, are full arch doors. Turning back to the entrances, the view over the fields of the Alentejo is … superb.

Walk through the wall to the castle of Monsaraz. Built by D. Dinis in the 14th century, it is classified as a National Monument. Around 1830 and after deactivation of military functions, the old square of arms of the castle happened to serve like a sort of bullring. Here and during the feasts in honor of Our Lord Jesus of the Passes, a traditional bullfight takes place annually, a secular tradition indispensable for the people of Monsaraz.

The castle of Monsaraz is a unique and exceptional tourist spot in Portugal, as it is one of the most splendid viewpoints on the wonderful mirror of the Alqueva Dam, the largest artificial lake in Europe and one of the greatest Portuguese works of our century. 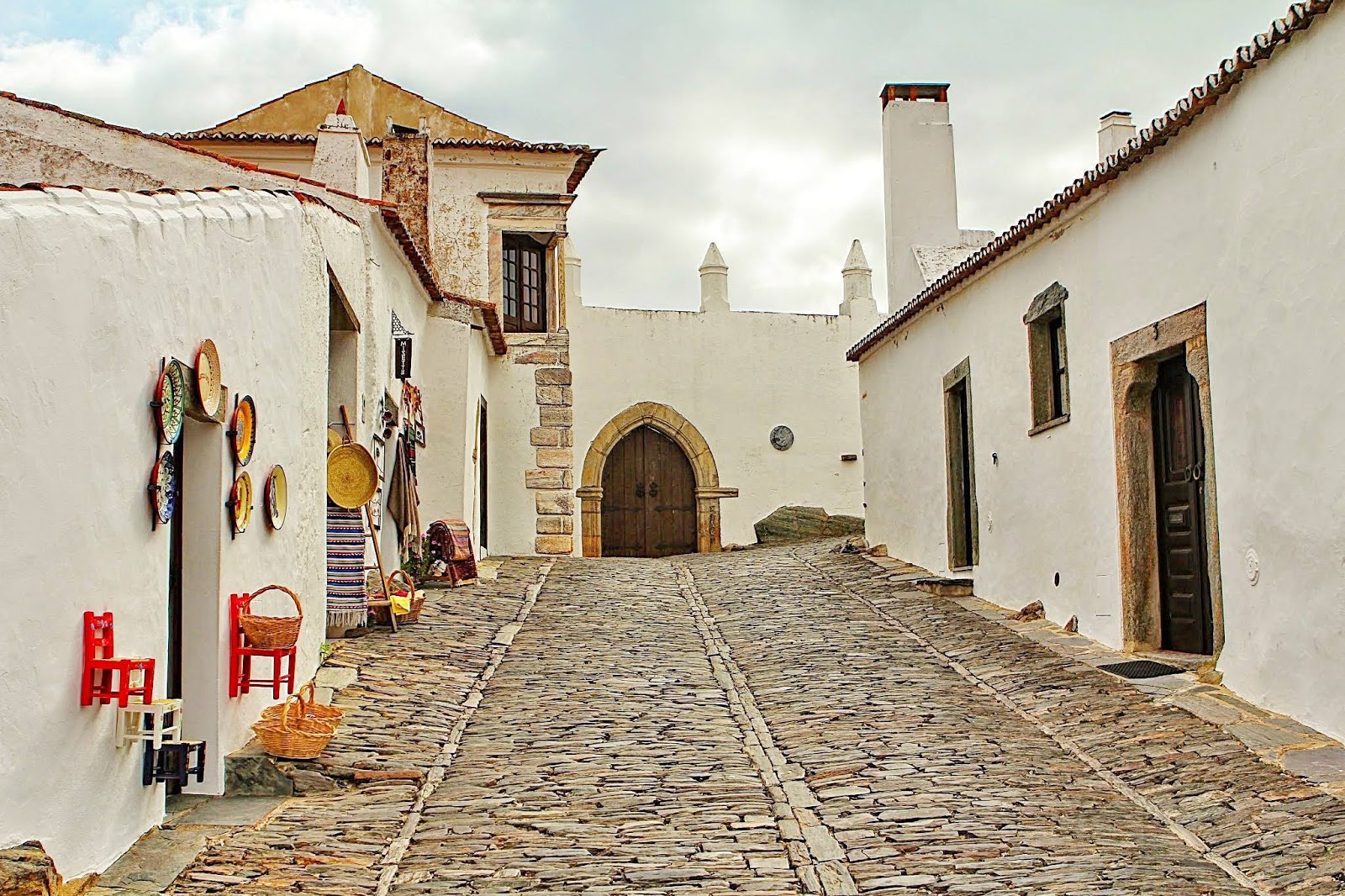 Walk slowly to Largo D. Nuno Álvares Pereira and enter the stunning Mother Church of Nossa Senhora da Lagoa. Built on the ruins of a Gothic church, destroyed by the black plague that devastated the region, this religious monument, from the sixteenth century and in regional shale, is authored by Pêro Gomes.

The Renaissance style matrix features a beautiful pediment, decorated by a panel of tiles and a Cross of the Order of Christ, in honor of Our Lady of the Conception. Inside, study carefully and let yourself be enchanted by the tomb of Gomes Martins Silvestre, Templar knight, first warden and settler of Monsaraz. Built in Estremoz marble, it has carved, on its front face, a funeral procession where seventeen figures parade.

Also on the ruins of its predecessor undone in the earthquake of 1755, is the 19th century Pelourinho. In white marble of Estremoz, this symbol of the jurisdiction and autonomy of Monsaraz is located right in front of the Mother Church.

Since it is in Largo D. Nuno Álvares, enjoy and enjoy the architectural and historical wealth of the buildings located there. Casa Monsaraz, also known as New Courtrooms of the Audience, from the end of the 17th century, boasts the village’s coat of arms; the Espírito Santo Hospital and the Casa da Misericórdia, which encompass the Misericórdia Church. This last sixteenth-century religious building, sober and simple architecture, houses an image of Lord Jesus dos Passos, patron of the village.

At Travessa da Cadeia you will find the Old Courtrooms of the Audience. These functioned, for centuries, as administrative headquarters and court of Monsaraz. When the management of the county passed to Reguengos, this building became the primary school and later at the tourist office. Enter and see the medieval fresco The Good and the Bad Judge. In it are represented the Judge of the Earth (the Good Judge), who holds a red stick, and the Judge of Out (the Bad Judge), who holds a white.

While the Bad Judge receives payments from both rich and poor (money and partridges, respectively), the Good Judge receives only the blessing of the angels who keep him. The satire to the corruption of the justice of the time is the most habitual interpretation for this fresco. However, it may only be a document illustrating the struggle of the councils to have their own judges elected from among their own, rather than judges from outside, appointed by the Crown.

Feel the sun set and in its pink light, reflected in the white facades of the houses of Monsaraz, wander through the streets and alleys of the village and contemplate the Chapel of St. Joseph, where the prisoners received the divine offices; the House of the Inquisition, whose designation leaves no doubt; the House of Juiz de Fora, donated to the University of Évora; the recently restored Church of Santiago.

Go to Old Cistern, which is said to have been a mosque originally. And do not miss the opportunity to visit the Chapel of St. John the Baptist, also known by Cuba, due to its curious cubic form of Moorish influence. Discover the Hermitages of São Bento, São Lázaro, Santa Catarina and São Sebastião, all so different, all so special and unique.